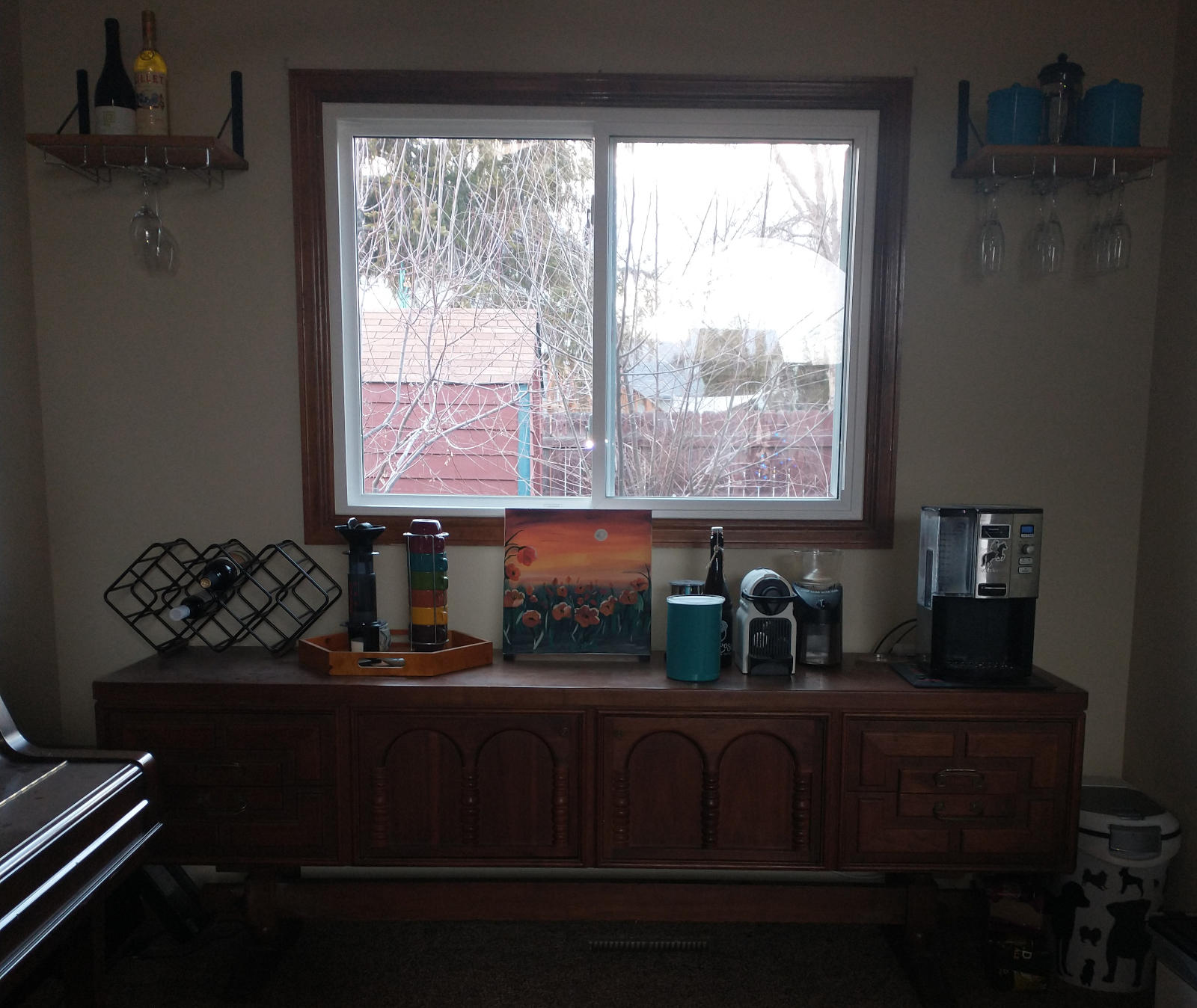 In our house, the kitchen is in the center of an open first floor. Even with all of the builtin cabinets, we wanted a bit more room to store beverages like coffee, tea, liquor, and wine, and also their associated tools and dishes. We decided it made sense to make a storage area that doubled as a counter outside of the kitchen, just around the corner in what I was told used to be a dining room.

We found a person selling a credenza that would fit in the area for $300 and drove to pick it up. It is about 7.5 feet long, which is slightly too long to fit in my car. I brought along a socket set to make more room by disconnecting the passenger seat.

The credenza had a serious problem that we didn’t notice until I had reassembled it at home. The back legs were held together with glue, but the weight of the cabinet on top was centered in front of the front legs. This meant the rear legs were under tension, effectively pulling apart a joint that was only held together by wood glue.

I took the legs apart and put holes for lag bolts in the top and bottom of the leg assemblies, then reapplied wood glue and screwed in the lag bolts that would hold the majority of the tension in the legs. I was glad to have a full-size drill press to make the very long straight holes into the center of each leg. The size of bolts I used was probably overkill, but the credenza is a very heavy piece of furniture, so I wanted to make sure that it would not collapse if a person accidentally put their weight on the front edge. I found an estimate of the axial holding force of lag bolts and made sure that one would be sufficient to hold a person’s weight.

We went back and forth for a while about how to waterproof the surface of the dry bar. Eventually I decided that, since it was already sealed, we should just leave it as-is and try it out. All of the appliances on the bar that could leak water also generate heat, so they will be on trays to protect the wood anyway.

I ordered cheap stemware hangers from from Amazon and discovered that the build quality was garbage. I ended up ordering 8 pieces total. Out of 8 pieces, 3 were deformed badly enough that I had to bend them back to shape and 1 of those had weak welds that failed while I was bending it.

With 6 drywall anchors holding the shelves up, they can hold quite a lot of weight, which gives us convenient places to store containers of coffee and bottles that can’t be stored on our wire rack.

Published in Home Improvement and Reconstruction and Repair