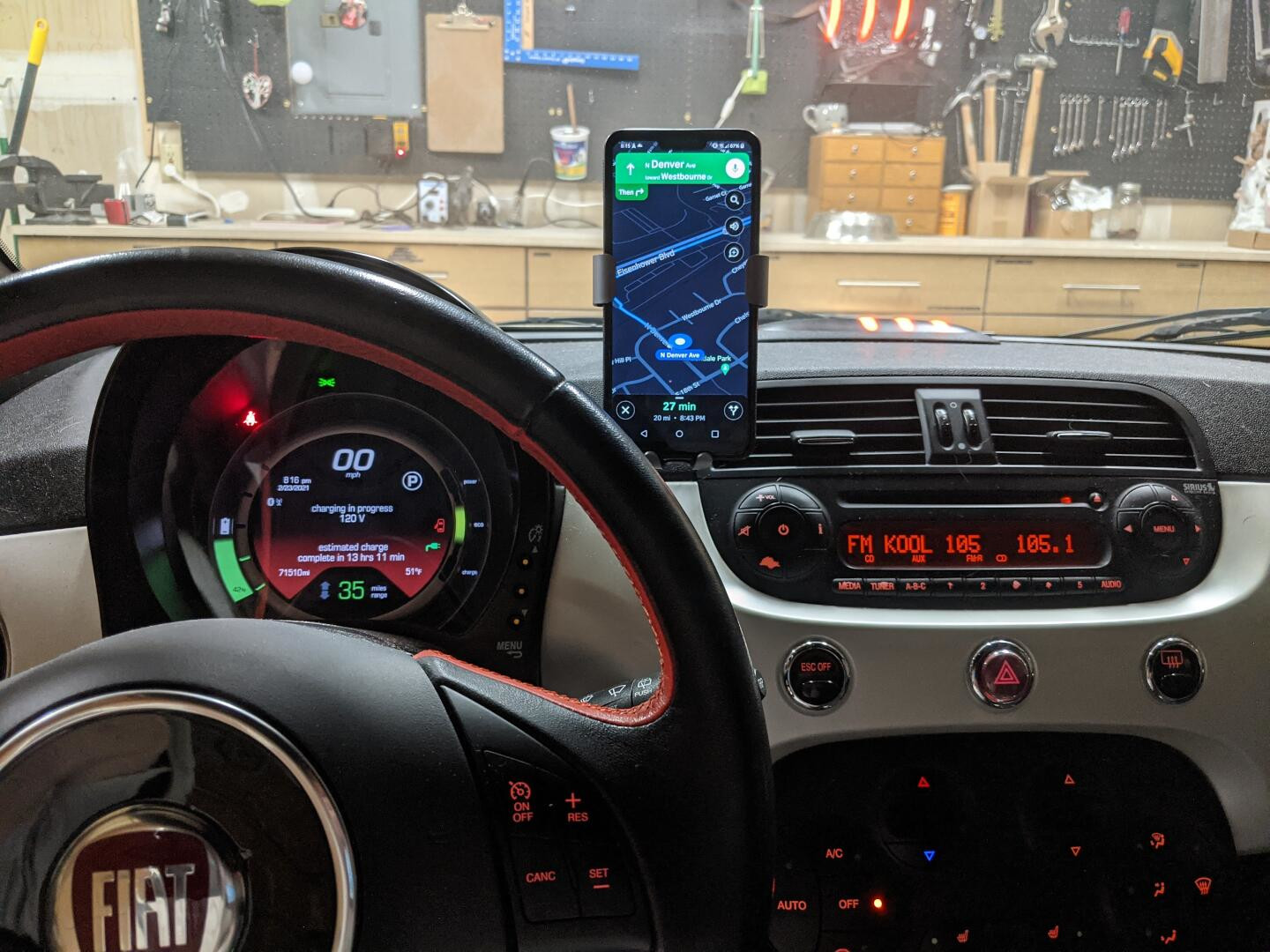 My wife bought a used 2013 Fiat 500e almost two years ago. She really likes the sporty quality of the car and that she never has to get gas. The car came with a special TomTom GPS unit, which is a bit weird since it has a maximum range of about 85 miles. In my opinion, it’s pretty hard to get lost within 85 miles of where you live. We both thought the GPS thing was pretty stupid, so we took it out. About a year later, I hacked together this little phone holder that replaces the GPS holder. I found someone else who did something similar a long time ago, and some other folks who bought regular phone holders and stuck them over the empty port, but mine is open-source and it uses the GPS socket to charge the phone.

Aside from not having a decent place to hold or charge a cell phone, the 2013 Fiat 500e dashboard has some aesthetic issues that are entirely because of the GPS stand. The TomTom does not seem to have any plugins for public charger locating tools like Chargepoint, or the capability to load any new maps or features. The GPS cradle sticks up on top of the dashboard in the driver’s view area, blocking a good chunk of the view of the middle of the lane. It plugs into this weird proprietary socket that TomTom probably developed. Just unplugging the stand isn’t a good solution, either, because the socket cover glows orange when it is empty. So instead of the TomTom blocking the driver’s view of the road, whenever we drive at night there is the reflection of the glowing port in the middle of the windshield!

Step 1 of this project should have been to get a Fiat 500e wiring diagram for this port in order to determine the pinout and current rating, but wiring diagrams aren’t free, so instead I took a volt meter to the pins and came up with a pinout. It was super easy, because the GPS stand has no CAN interface and is only receiving 12V power from the vehicle.

I bought one of these wireless charger stands and removed the wireless charging holder. Then I took the TomTom holder out and dismantled it. I could probably have used the stand’s voltage converter as-is, since it seems to output 5V, but I couldn’t get useful specs on it. I opted to replace it with one of those little bricks people use when they only have 5V LED strips.

I cut off the arm that holds up the GPS with a saw so all that was left was the base component, then I set about modeling all the parts in OnShape. There are two sides to the case that snap together around the base with locating pins to keep it nice and tight.

The back is hollowed out to have just enough space for the DCDC converter and wires. The USB cable comes out the front just under the adjustable arm. These little DCDC converter bricks actually come with the USB cable already, so this could just as easily plug straight into a cell phone instead of a wireless charger. In retrospect, I could have designed this with a slightly more common screw (it’s a #10-32 x 2.5-inch pan-head machine screw, which was a little bit difficult to find, since it seems most suppliers don’t make them longer than 2 inches).

The screw clamps the arm in the grip and is also the only fastener clamping the case pieces together, so it’s very easy to work on. I printed a few prototypes to get the geometries and print settings correct and then made a finished version in black PLA so that it isn’t a color that the driver can see reflected on the windshield.

Functionally, in the vehicle, it does a good job. The arm can be angled pretty far down so that the phone is held just next to the stereo (it’s not quite that low in the pictures), much lower than the original GPS unit. The Squish wireless charger is nice, and the location allows the driver to use their phone in speaker mode instead of the bluetooth system if they need to (some may be familiar with the horrible garbage noise that the 500e bluetooth system can produce when it malfunctions). Overall, this was actually a nice addition to the car.

If you would like to fork my design for your own use case, please go ahead! That would be awesome. Also, please let me know what you make so I can check it out.

Published in 3D Printing, Automotive, Electronics and Reconstruction and Repair