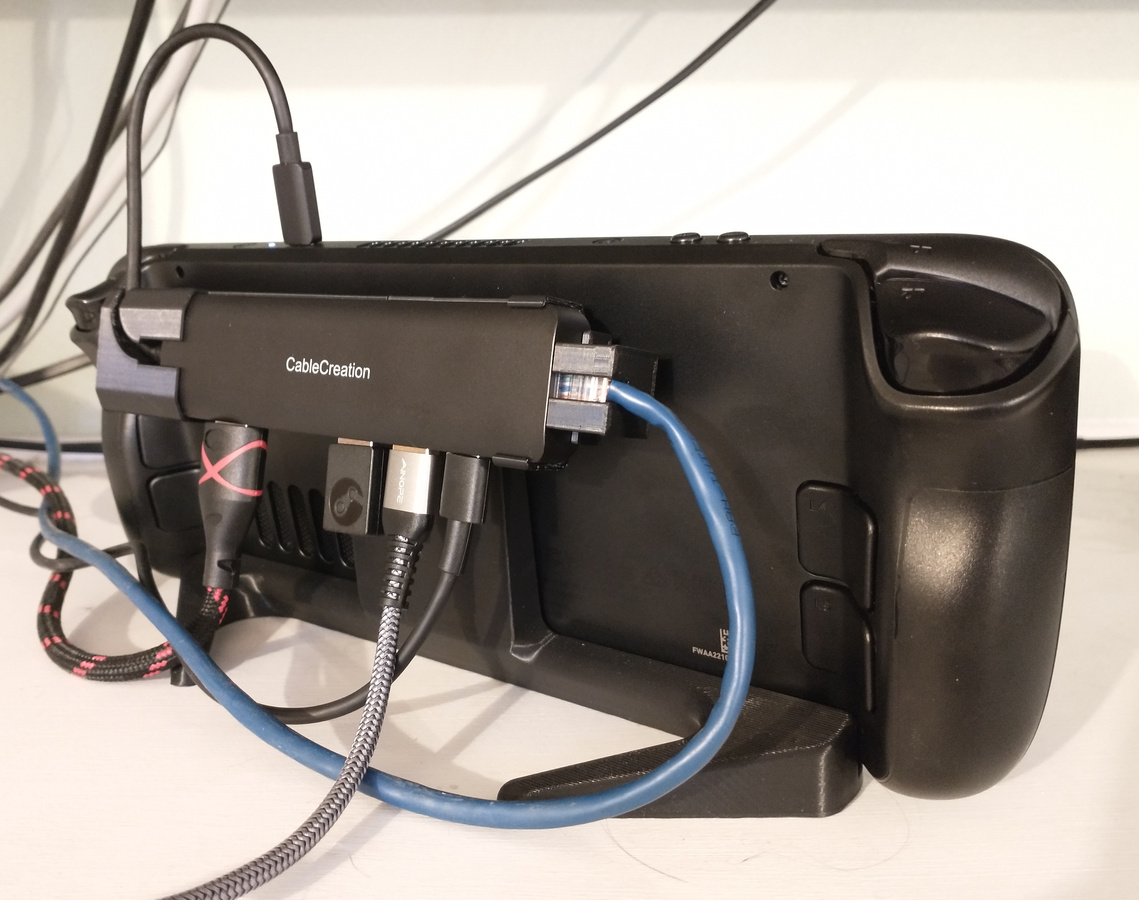 I finally received my Steam Deck this week and started using it. I’m really impressed with the ergonomics, the DisplayLink dock support, and the Steam OS power management features. I’m even more impressed with Valve’s “if you don’t like it, change it” responses to questions about the system. It’s extremely refreshing, especially in the current game system market, that I don’t have to fight for my right to repair and modify something that I own. Gushing aside, I really wanted a stand but didn’t find any designs that met all of my requirements, so I made my own.

I started by searching Thingiverse for Steam Deck stands. There are a lot of good designs, but I never found one that met my specific requirements:

Designing a stand for the Steam Deck was super easy because Valve provided us with a detailed solid model of the device. I imported their model into OnShape and modeled my dock to prepare the interfacing parts.

I designed a mounting bracket for my dock that could be split in half to reduce the required support material, and used M2.5 machine screws that I have in abundance to fasten them to the main stand. Machine screws don’t really bite into plastic, but the force they are holding is so minor that it doesn’t matter.

The main benefit of a design where the dock bracket is removable is modularity. If I decide to replace my dock in the future, I don’t even need to design a fancy plastic bracket, I can just drill holes in a piece of wood, screw that wood to the plastic stand, and zip tie my new dock on.

Unlike the Switch, the Steam Deck doesn’t have any interfacing geometry along the bottom. It doesn’t need it there because it doesn’t dock the way the Switch does, but that does mean that I couldn’t just make a tiny little plastic stand like I did for the Switch. Instead, I made the stand wide enough to almost touch the insides of the handles so that it can only move a few millimeters left or right.

The test prints showed some issues that I was able to fix, and the first prototype came out without any issues (booyah). After looking at it closer, I did make a minor change to the dock bracket to reduce the non-functional plastic a bit. Now I think it’s ready for anyone else to use.

You can find my design project on OnShape. The STL files are available on Thingiverse.

UPDATE: This dock has insanely bright TX/RX LEDs on its ethernet port, which turned out to be kind of annoying when we watched a movie in the dark. I modified the design of the holder to block them out and added a plastic cover that can clip over the cable to obscure the light that shines through the clear RJ45 plug. If necessary, a little bit of electrical tape or shrink tubing could make it totally dark.

Published in 3D Printing and Electronics